I recently found myself in what was—besides hurricane Fiona—arguably the scariest position I’d been in. Someone I was around was drunk to the point of being a danger to themselves if they’d been alone. Being as we’re all in university and may very well each find ourselves in a position like this, I figured I’d walk you through what I did.

1. Decide whether this is something you can handle on your own or if you need to call for backup

I was lucky. In the grand scheme of things, they were just a few too many beers in and just needed someone to make sure they weren’t going to choke when those beers reared their ugly heads again. Plus, I know this person very well and we have enough trust established that they’ll listen to me when they know it’s for the best. However, this may not always be the case when you’re with someone who is highly intoxicated.

Assess your surroundings, ask yourself whether this person may be a danger to you as well as themselves, and how you can help. If you’re questioning the safety, health and/or well-being of anyone (including yourself), reach out for help.  You can contact Dalhousie Security if you’re on campus (Halifax: 902-494-4109; Truro: 902-893-4190) or 911 if you’re off campus. If you’re in residence, you can also reach out to a RLM or RA.

Put them in the recovery position. This will keep them safe by making sure their airway is kept clear and open. It also reduces the risk of any vomit or fluid causing them to choke.

They should be resting on their side with their bottom leg straight underneath them and their top leg bent to prevent them from rolling onto their stomach. Their bottom arm should be bent while their top hand should be tucked under their head to support and elevate. 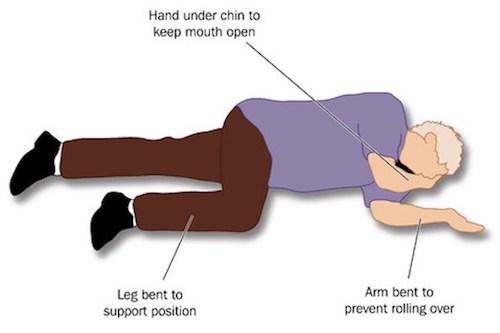 The first thing to do is get them into a safe position. Help the person to a safe area and help them into a sitting up position with their legs and back stabilized

This may not be the easiest feat if they’re bigger than you,. The best thing to do is have them lean against a wall with their legs spread out in front or with their knees bent in order to keep them upright. It is vital that if they are going to throw up—which is likely—that they do not lay down until it’s over.

I advise against letting them walk alone, as well. I advocate for using your judgement but, even if they look stable, with one wrong move they may fall down and injure themselves. Have them put their arm around your shoulder and maneuver them slowly. In no way is this a race—every step should be slow and careful.

4. Find a bucket to have them hold and sit down with them

The most important thing is staying with them. Just because they’re sitting doesn’t mean they won’t slump over and put themselves in a dangerous position. Sitting with them will ensure that if you see them start to tip then you can haul them back up again.

It will do you well to remember that someone experiencing high levels of intoxication will most likely not have a firm grasp on the bucket or where it is. I spent the majority of the night holding it for them. Sitting with them will ensure you can take over holding the bucket and will not have to clean a carpet—or they won’t have to—in the morning. You’re also able to make sure they’re coming up for air.

5. If/when they’re more stable, mitigate any risks you can find in the room

I recommend removing anything that would pose a tripping hazard if they were to try and walk to the bathroom or anywhere else, though I doubt they would. Take anything and everything off the ground (backpack that you tossed on the floor after class) and pile it somewhere out of the way where it can be easy to find and replace tomorrow.

6. Encourage them to drink water

Replenishing the fluid they’ve expelled is going to aid in a quicker recovery and prevent them from getting worse. Fill a container that’s easy to drink from and won’t spill easily. Don’t let them chug the water, though, because odds are they’ll puke it back up in record time. That’s the opposite of what we are trying to achieve.

7. Ensure if they lay down, they’re in the recovery position

The recovery position, as noted above, is the position used to stop someone from choking in their sleep.

8. Monitor them while they sleep for at least an hour

This is crucial. Although I put the person I was with in the recovery position, they still ended up vomiting in their sleep and began to choke. Had I not been paying attention to pull them up, it may not have ended well. This doesn’t happen often and I am in no way trying to fear monger, but it shows why we need to stay awake as long as we can. Once you see that they’re not a danger to themselves—again, advocating for your judgment skills—you can rest as well.

9. Take care of yourself

After experiencing an event like this, I was exhausted, both physically and emotionally. Watching someone go through something as dangerous as over-intoxication takes its toll on you, especially when you’re in charge of their well-being.

It’s your duty to yourself to take the time you need to contemplate what you went through. Be kind, treat yourself with compassion, and set boundaries where you need to. If it’s in your best interest then consider telling the person how it made you feel—be it scared, sad, or otherwise.