This year I’ll be giving my birthday a little nudge backwards by a day to make it line up with the green-tinted holiday, St. Patrick’s Day. After all, why celebrate on the 18th when the 17th is already dressed in my favorite colour? However, if I’m stealing a little bit of the Irish thunder to make my own day extra memorable, it feels only right that I give something back—an ode of sorts.

I wanted to look into what makes Saint Patrick’s Day unique and special to the people it touches most, but I didn’t want to do my ode to green an injustice by resorting to Google. So I turned to a more reliable source. I logged onto my phone and pleaded with the only Irish person I know to answer a slew of questions. Thankfully, he did.

So, here some of the things I learned about Saint Patrick’s Day, from the mouth of an Irish man himself, Colm Murphy.

To be clear, this wasn’t a question I asked but it was made clear to me on three separate occasions that Saint Patrick’s Day should not, under any circumstances, be referred to as “Patty’s Day.” One of those times it was written in all caps. Given the repetition and ferocity of this information, it earns the first spot on my list of findings.

My advice? Listen to the Irish, unless you want to get ruthlessly roasted. Speaking from personal experience, avoid at all costs.

2. Parades are a big part of the celebration, and they’re for people “in their 20s” too

This is a question I asked: How does celebrating Saint Patrick’s Day in your 20s differ from how you celebrated when you were a kid?

Beyond the slight lecture I received on how “old” that question may or may not have made him feel, I did learn that a lot of the local clubs in the counties come together to put on parades. It’s a community affair, one involving party hats, friends, and juggling competitions.

“My greatest memory on St. Paddy's Day was learning to juggle,” says Colm. “There was a competition beside the parade. If you could juggle three juggling balls you got to keep them. It took me over an hour but I did it—for 15 seconds, but I did it.”

Colm says that he still goes to the end of the parade, however I believe that to be an under-exaggeration. You can still be front and centre at the parade in your 20s—he definitely is.

3. Saint Patrick was pretty cool and so are the traditions surrounding his day

The exact terminology used was, “a sound man, in fairness.” He did banish all those snakes from Ireland, after all. To quote again: “I like Saint Patrick because he got rid of the snakes.” I’m sure there’s more to this story—he’s a renowned Irish Saint after all—but, for now, we’ll commend him for his marvelous extermination job.

Saint Patrick’s Day is swathed in tradition. A shamrock pin is commonly seen as a symbol of the holiday, worn often in combination with festive garb when going out. Cabbage and corned beef are eaten at family gatherings and there are traditional social gatherings that take place called céilis where traditional music is played while people dance and sing. Attending one has officially made my bucket list.

4. The Irish don’t mind that other countries celebrate Saint Patrick’s Day, but no one does it better than them 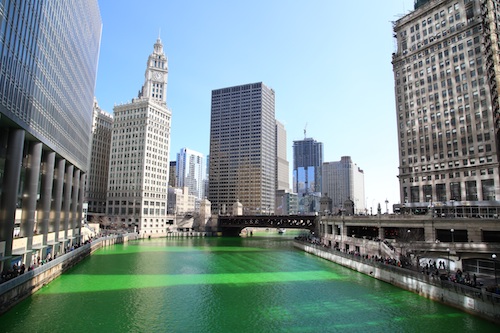 To be fair, dying the Chicago river green is a decent way to celebrate. (photo: Pxhere.com)

Because the holiday was brought to North America and other continents by Irish immigrants and has since boomed into a massive world holiday, I had to inquire about how the locals felt about other countries celebrating Saint Patrick’s Day.

I’m relieved that worldwide celebration is welcome because I love Saint Patrick’s Day. But Ireland is definitely the place to be.

“I love celebrating it in Ireland, though, because the Irish atmosphere, pubs, people and drink are better and more genuine.”

I can’t argue with that—of course the Irish do it best! Colm did, however, admit that he wouldn’t mind seeing the Boston Parade, so maybe there’s hope yet.

5. Saint Patrick’s Day is more about coming together as a community to be with one another than it is anything else

If there’s one takeaway from this article, it’s this: Saint Patrick’s Day is about being with your friends and family in any way that you can. It’s about breaking barriers to share our love for one another. It’s a party, sure, but from what I’ve heard it’s more of a chance to feel like something so much greater than ourselves—a chance to really get to what it means to be human and come together—even if it’s via an iPhone screen.

So, however you choose to celebrate Saint Patrick’s Day this year, be it with your friends in person or on Zoom, remember that as long as you’re sharing a laugh it counts.

Colm, I owe you one and I hope you enjoy this. Happy Paddy’s Day!